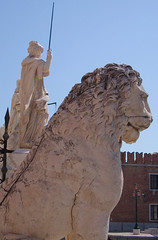 I was contacted a couple of days ago by a Wikipedian who had seen this picture in my flickr stream. He had a story to tell about this lion, he said, and would I be prepared to re-license the image appropriately to allow this?

Of course I agreed, and the Wikipedia article on the Piraeus Lion is now available. Of course I’m immensely chuffed that something I took as a holiday snapshot should turn out to be a bit more useful than that.

I knew there was some sort of story connected with one of the lions when I took the picture, but wasn’t able to see the rumoured graffiti even with it right in front of my face. One of the most interesting things to me about the Wikipedia article is that the second image illustrating the topic is actually an enhanced version of a detail from my own image.

For someone who believes in the Creative Commons, this is a pretty nice unbirthday present.